As of late (last 9 months) I am not a big TV watcher. However I happen to come back into possession of a TV that I own. And so it was time to get this little baby off the floor and put it where it belongs. You must understand that this was something that I have delayed because it just really didn’t matter. Anyways time to mount the TV. I ordered the wall mount late on a Tuesday night and who coulda guessed that Amazon had a shipping center in Phoenix?? Mount arrived Thursday afternoon!

So very excited to tackle a project and work with my hands I set forth on Thursday night…and it went a little something like this.. 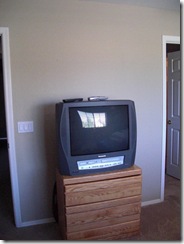 This was the borrowed TV that I had that needed to go.

END_OF_DOCUMENT_TOKEN_TO_BE_REPLACED

I have been getting much more involved into twitter related events lately. Over the last few months I kept seeing references to something called #smunch. Well this time around I was actually in town, had the time to go and knew a few of the tweeps that would be there. Keep in mind when I say knew, I just mean I have conversed with them via twitter.

The event was setup via twtvite. I have seen this used for several events and it is great for tweetups. There was one slight problem I found out later. The event was setup in Mountain Standard Time. Arizona doesn’t use Day Light Savings Time and thus my Google calendar is set to Mountain Standard (Arizona) Time. So I was in downtown Phoenix an hour early. No worries though I just stopped by LUX coffee and ended up running into several friends.